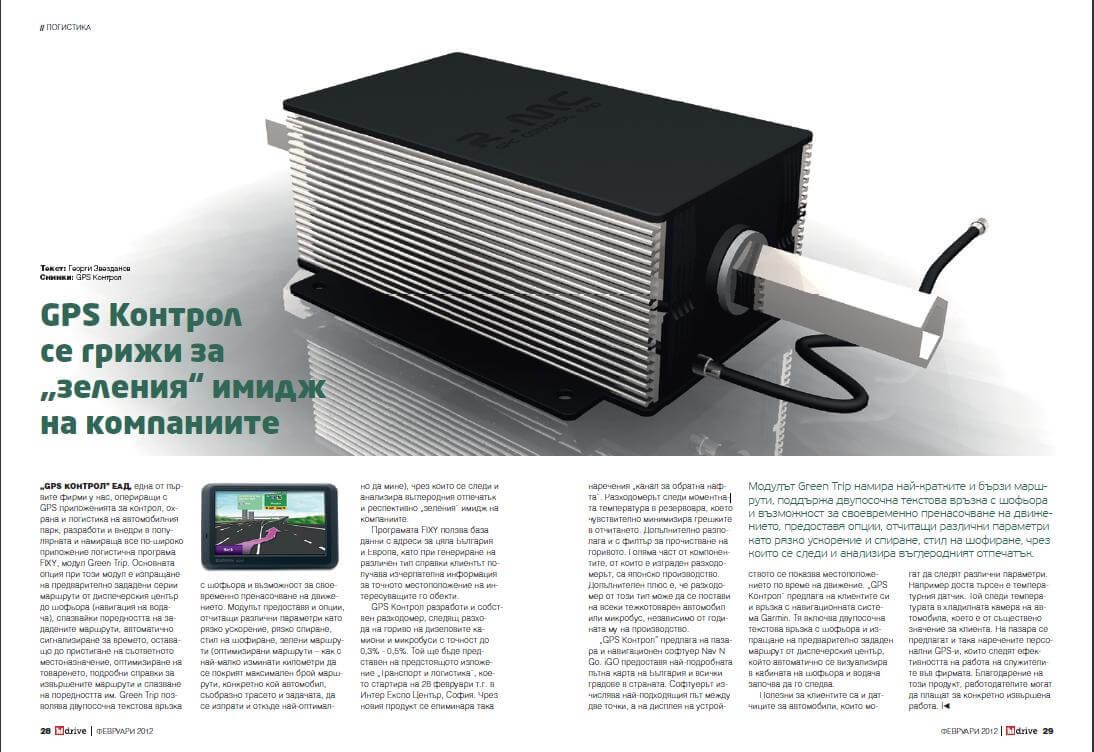 “GPS Control” JSC, one of the first companies in Bulgaria, operating with the GPS applications for fleet’s control, security and logistics, developed and built in Green Trip module in the popular and finding increasingly wider application logistic program FIXY. The main function of this module consists of sending set in advance series of routes from the dispatch center to the motor vehicle’s driver (driver’s navigation), observing the order of the routes set, automated signaling for the time remaining until the arrival at the respective destination, optimization of the loading of goods, elaborate and extensive records for routes completed and observing the order thereof. Green Trip allows for two-way text connection with the driver and it has option for timely rerouting of the motor vehicle. The module also provides options measuring various parameters, such as sharp acceleration, sharp breaking, driving style, green routes (optimized routes – how with least kilometers traveled to cover maximum number of routes, to determine which motor vehicle is in the region and to send it at the address), through which the carbon footprint and the “green” image of the companies respectively is monitored and analyzed.

The FIXY Program uses database with addresses for all of Bulgaria and Europe, and upon generation of various types of records the customer receives extensive information for the exact location of the objects which he is interested in.

“GPS Control” JSC developed also its own cost-meter, monitoring the fuel consumption of the diesel trucks and vans with accuracy up to 0.3 % – 0.5 %. It will be presented at the forthcoming exhibit “Transport and Logistics”, beginning on February 28th this year in “Inter Expo Center” – Sofia. The so called “reverse oil channel” is eliminated through the new product. The cost-meter monitors the transitory temperature in the tank, which considerably minimizes the errors in the measurement. In addition it also has fuel cleaning (treatment) filter. A large part of the components of which the cost-meter is made are Japanese made. An additional plus is that the cost-meter of such type can be placed in any motor vehicle or van regardless of the year of the manufacture thereof.

“GPS Control” JSC offers at the market also navigation software Nav N Go. iGO has the most detailed road map of Bulgaria and all settlements in the country. The software calculates the most adequate and suited route between two points, and the device’s display shows the location during the time of driving.

“GPS Control” JSC offers to its customers also connection with the navigation system Garmin. It includes two-way text connection with the driver and sending of set in advance by the dispatch center route, which is automatically visualized in the driver’s cabin for the latter to observe it.

The so called personal GPSs, monitoring the efficiency of the work of the company’s employees, are also offered at the market. Thanks to such product the employers are able to pay for particular work performed.

Page load link
We use cookies on our website to give you the most relevant experience by remembering your preferences and repeat visits. By clicking “Accept”, you consent to the use of ALL the cookies.
ACCEPT
Manage consent

This website uses cookies to improve your experience while you navigate through the website. Out of these, the cookies that are categorized as necessary are stored on your browser as they are essential for the working of basic functionalities of the website. We also use third-party cookies that help us analyze and understand how you use this website. These cookies will be stored in your browser only with your consent. You also have the option to opt-out of these cookies. But opting out of some of these cookies may affect your browsing experience.
SAVE & ACCEPT
Go to Top